For Father’s Day weekend, my son Jared, my dog Sinatra and I went camping at Mongaup Pond in the Catskills for two nights. I got to do some fishing, sit by the camp fire, hike, and most of all, spend some quality time with my son. It was a great weekend!

We had to set up in the rain, just a drizzle though, and were expecting scattered thunderstorms the entire weekend. Luckily it only rained hard Saturday night while we were asleep, but we had to set up “tarp city” to keep from getting completely soaked just in case. I have a 10×20 tarp that I bring for just such occasions, but in order to get it high enough for head clearance, it needed be tied fairly high in the tree. I tied the rope around a log and tossed it over a branch about 15 feet up. I made it first try, but it came untied after it went over the branch leaving the rope hanging there about 12 feet up the tree. Of course, Jared offered to climb the tree to pull it down. After we were all set up, we had a nice section of dry area, including the 12×12 Paha Que canopy I have.

Mornings are reserved for fishing, and I was lucky to have my buddy Mike come up Saturday morning and join me. I only caught an 8-inch brown trout on my 9′ 5wt rod with an Isonychia dry fly, but Mike got into a couple bigger ones swinging wet flies and nymphs. I got skunked Sunday morning on the Willowemoc Creek using my 00wt rod before heading up to the Beaverkill, which didn’t yield any better results. The Beaverkill is a beautiful river full of big fish and steeped in fly fishing lore. It’s just up Route 17 from the campground in Roscoe, NY, but the trout weren’t really rising the two mornings I was there, nor on the Willow. Reports said that the fishing doesn’t pick up until late afternoon and until dark. Nonetheless, I was up at 4:30am making coffee, on the river before 6:00, fish for 4 hours and head back to camp for breakfast. Jared would still be sleeping when I got back at 10:00ish, so it was perfect.

Saturday was a jam-packed day full of dog swimming and a hike to Kaaterskill Falls, which is 1.5 hours away from the campground. First, we took the dog for a swim on the pond. There is nothing my dog Sinatra likes better than playing fetch in the water. Once it was time to leave, he refused to come out of the water. Every time I tried to put the leash on him, he would take his stick and run back into the water. It was hilarious.

Our hike to Kaaterskill Falls was beautiful. Later in the summer, when there is less rain, the falls are often just a trickle, but not today. The water was just right so that it looks great and you can still stand under the falls after the 0.7 mi hike from the viewing platform at the top. Jared even went swimming in the natural pool at the base of the falls. The viewing platform is new, and the walk there is easy from the parking lot at the top. The hike down to the base of the upper falls is more challenging, though I did see a couple children make the hike. I also saw a few people refuse to make the hike down as it is somewhat steep and slippery. There are also stairs built into the mountain now so that you can hike down to the lower portion of the falls (it is a two-tier waterfall totaling 260 feet, one of the tallest waterfalls in the Eastern United States). There is also access to the bottom of the falls via a shorter, and more level, 0.4 mi trail that leads to Route 23A at Bastion Falls on the way up to North South Lake State Campground. We only made it to the upper portion due to time constraints, but that is the most beautiful part! Sinatra loves hiking, but because he is a lab, it is near impossible to keep him out of water. He was quite upset that Jared got to go swimming and he did not. There were just too many people to let him run around off leash.

After fishing Sunday morning, we took Sinatra swimming again and started breaking down camp, trying to race the thunderstorms that were supposed to arrive any minute. They never did! Mongaup Pond is a beautiful campground and never disappoints. North South Lake State Campground, which is on the other side of the Catskills right by Kaaterskill Falls, is more popular, bigger and also beautiful, but Mongaup Pond is more quiet and peaceful, which is what I’m looking for in a campground, not to mention the access to fishing is much better from Mongaup Pond. Willowemoc Creek runs alongside DeBruce Rd on the way up the mountain to the campground, so it is very convenient to fish when camping, and the Beaverkill is only a few minutes up Route 17. We have our annual camping trip with our friends planned for August and are really looking forward to it. In July, my wife and I are going to Green Lake State Park near Syracuse, NY to celebrate our 5 year anniversary. I’ll see you after that! 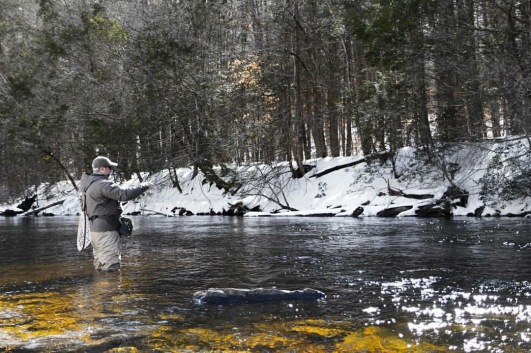 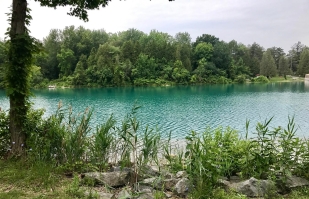 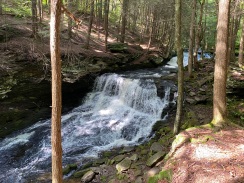 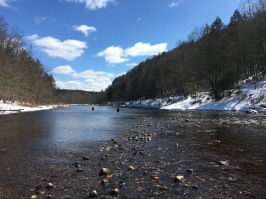 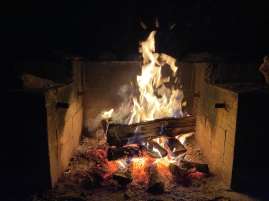 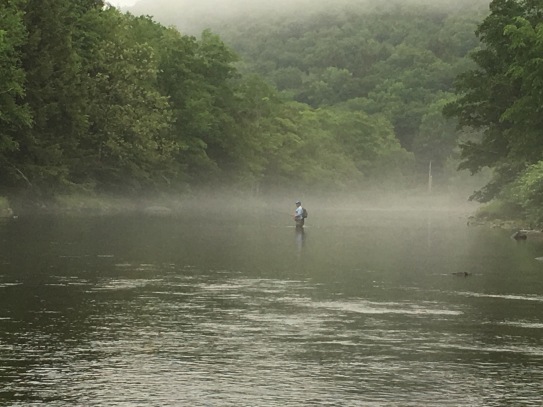 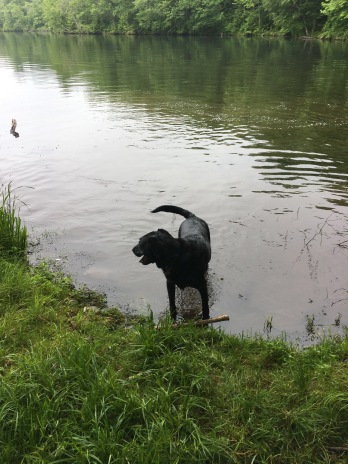 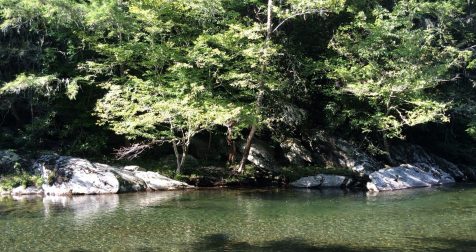 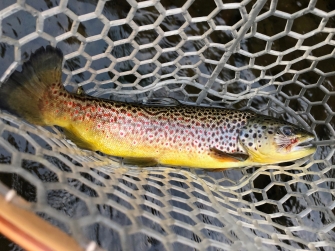 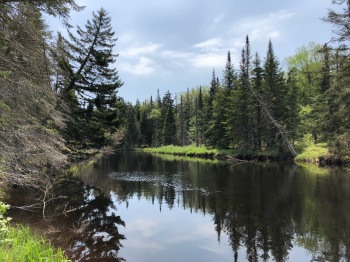 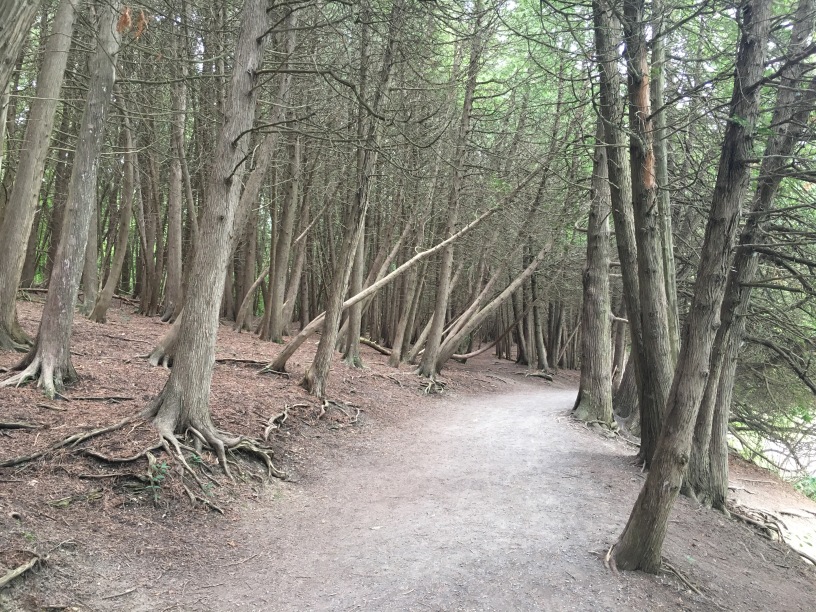